Ton Pret is an artist with a very personal style, which is characterized by a very bold colors, fanciful figures and an explosion of enthusiasm, spontaneity, passion and positivity. Influential people from the art world such as Erik Hermida and Geert Jan Jansen describe the style of Ton Pret as “exponent of Cobra,” “Cobra 60 years later” or “Cobra for the 21st Century”. How to call it, it is clearly the “Ton Pret Style”. This style of Ton is best described as “colorful realism of a different reality, with a strong positive effect.” With his work Ton wants to get the positive in man upwards, by taking them to another reality, where the positivity like a thread running through it.

Although Ton as a child already drawn a lot, molded and other forms of creativity was busy, it still took many years before he decided to become an artist. From one day to another, he has changed course and followed his heart. He also has received some artistic training, but is a pure autodidact who totally guided by rules or currents, but only his spontaneity and inexhaustible imagination follows. Ton result his work is unaffected and is full of pure passion. Ton’s paintings are transformations into another reality. With his paintings he tries to share with the viewer of these other reality. The viewer is, as it were taken to another dimension and experience this as very pleasant and special.

In a very short time, Ton has his art on to take the card out and hung his work among others in the famous Amsterdam Beurs van Berlage, the Fortezza da Basso in Florence, Ascona, Rijksmuseum Amsterdam, Dutch Shoe Museum, the Rotterdam museum the Kunsthal, the Amsterdam Museum of Bags and the Louvre museum in Paris. Not only his paintings and sculptures are sought after by collectors and enthusiasts, but also his art shoes, clothes, watches, tableware and other designs have become true collector’s items. Reason that Dutch most exclusive shoe brand Greve has to Ton to design shoes for their advertising and art shoes for the catwalk in Paris. Even Dutch Shoe Museum has art shoes Ton, in their collection and art edition of the Michael Kors handbag is included in the collection of Dutch Bags Museum in Amsterdam.

Among his clients are several well-known collectors, business leaders, celebrities but also people like you and me, who appreciate the spontaneous style of Ton. One of them has even completely leave his Ferrari paint and now has a moving work of art. Ton also has several furniture designed and some very well-known Italian designers now work even Alessandro Mendini together with him and are interested in a collaboration. Other art commissions include a designer bath for a design company and a Fender Stratocaster in Art Edition. This Fender Stratocaster is in collaboration with the renowned French guitarist Jean-Pierre Danel, Brian May (Queen), Hank Marvin (The Shadows), Steve Lukather (Toto) and French superstar Jean-Jacques Goldman. Also art editions of the famous Philippe Starck chairs, an Art Edition of Italian design bike Duedipicche brand and recently very special eyeglasses and sunglasses for the US company Eyewear Design Alliance, which later go global this year. And there’s a lot more to come …… Outside the existing collection, Ton also works in personal mission. 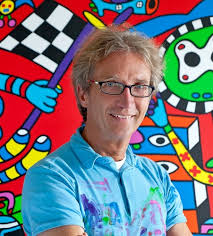